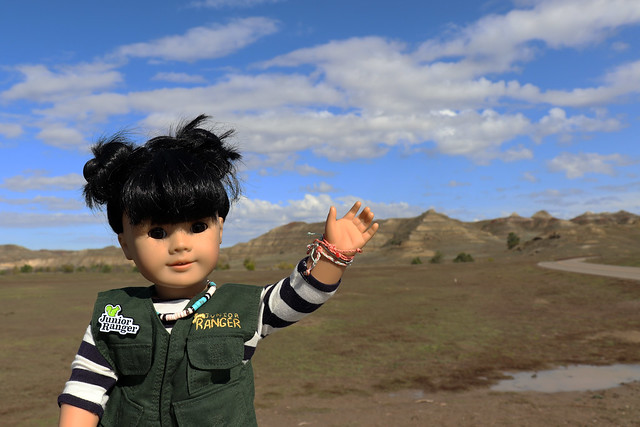 I really enjoyed this park because of the natural beauty too! Sometimes it's called the badlands of North Dakota, but I don't think the land is bad at all- it's so pretty.  It was a very blustery day when we went, so my hair was blowing out of its buns! That's okay though, I had lots of fun! 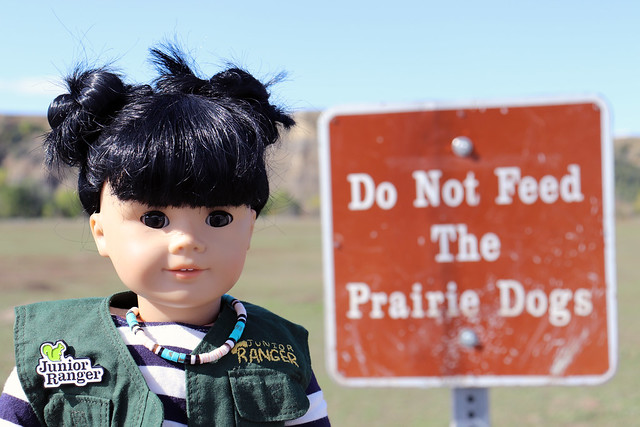 Our first stop was at a prairie dog town! Black-tailed prairie dogs aren't dogs. They're actually rodents that are part of the squirrel family. They're so cute! I wish I had gotten close-up photos of them, but it is very important to keep your distance from wildlife. It's dangerous for the animals and for people too! Prairie dogs are vegetarians, but they are food for other animals like birds of prey. In fact, when one prairie dog gives a warning signal, all the prairie dogs quickly go back to their underground burrows! They only come out when one of them gives an all-clear signal! They're such amazing little animals. 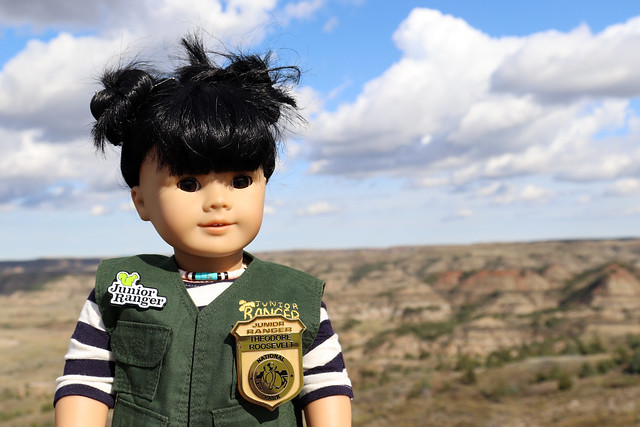 After I received my badge, we went back outside to take photos of the park. Can you see the different layers in the rock formations behind me? They're amazing! Each layer represents a different period of time when sediment like gravel or sand hardened.  There are fossils out there, though the badlands themselves were formed just after the dinosaurs went extinct. 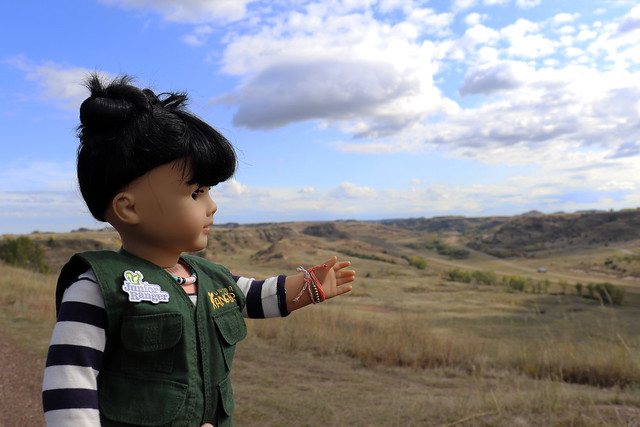 Before long, it was time to get back on the highway heading east to Minnesota. Can you see the highway in the picture? I'm looking out at it! I loved going to Theodore Roosevelt National Park. My favorite memories were seeing the prairie dog towns and a herd of bison! The bison were so special. They're massive! We were very careful to stay in the car as we passed the bison; they are unpredictable and can even kill you!

The Mandan, Hidatsa, and Crow peoples originally lived on this land and still do today.  In the nineteenth century, Native Americans were pushed further and further west, so other indigenous peoples also made this area their home.  It's important to remember that the land wasn't empty, it was and is the home to plants, animals, and people!

Have you ever visited North Dakota? What did you do there? Did you see any animals?
Posted by Inky at 8:04 PM